EPISODE 006: LONNIE MCDONALD – A KNIGHT’S CRUSADE TO JOUSE BUZZARDS IN ALL 50 STATES 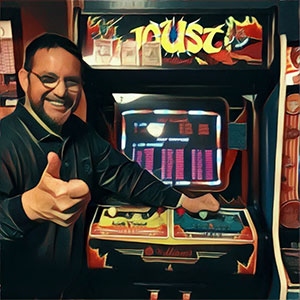 In this episode, Imoto and David interview Lonnie McDonald, the World Champion of Joust, who played for 24 hours in the early 1980’s and received this acclaimed designation from the manufacturer of the game, Williams. In 2011, after a 27-year hiatus from playing Joust, Lonnie initiated a “Joust Tour” to play 100 Machines in 100 weeks all to 9999999, and he’s on the verge of playing Joust in all 50 states. In addition, he is the Founder and President of TCG Group and holds the prestigious IICRC Designations of Master Textile Cleaner, Master Restorer Fire & Smoke, Master Restorer Water, Practicing Senior Carpet Inspector, and IICRC Approved Instructor.

Joustmaster.com
Lonnie McDonald: Facebook – LinkedIn
Museum of Pinball
No Princess in the Castle
Learn more about investing in the Launch The Ball feature film.

IMOTO CHECKS OUT NEW GAMES AT THE MUSEUM OF PINBALL (BANNING, CA)